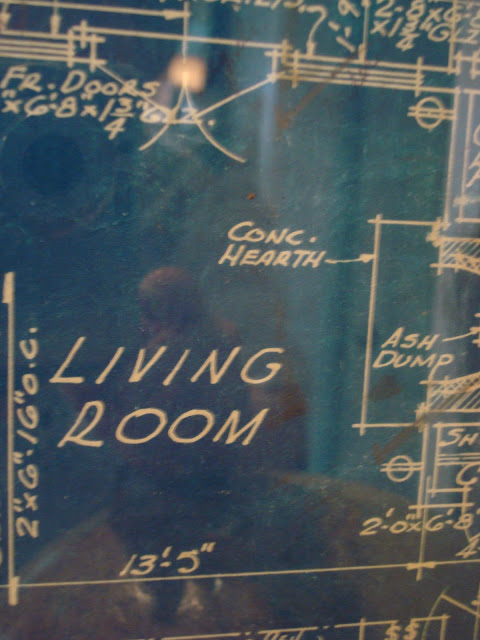 One of the treasures we found during renovating
The Provision
was the original blue prints
used in 1954 to build the house! 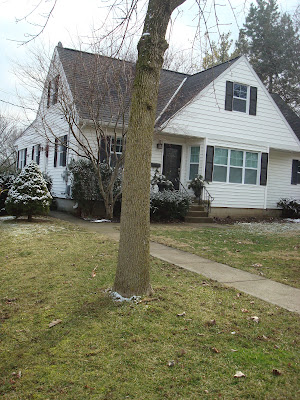 When I was young....
I dreamt of becoming an architect.
While other kids were drawing pictures
of horses, unicorns, butterflies....
I was drawing floor plans.
Even a simple game of "playing house"
would lead to the "organization"
of a home design...
"from this tree to this tree is the living room,
the sandbox is the kitchen..."
you get the point,
I was alittle obsessed
to say the least! 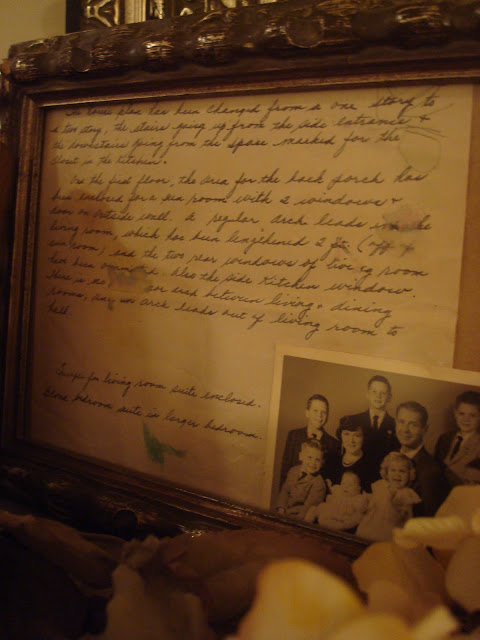 Our home was originally to be built as a 1 story home,
but somewhere along the building process
a second story was added!
The letter above was given to me by my neighbor,
who was a cousin to the man who built our home.
The letter, written by his wife, detailed the
changes that were made to the home during building.
I feel so blessed to have this letter!
The photo is of the family that both built the home
and owned it till it was sold to us last year.
I found the photo behind the fireplace mantle!
To think
2 adults and 7 kids
all lived and grew up here! 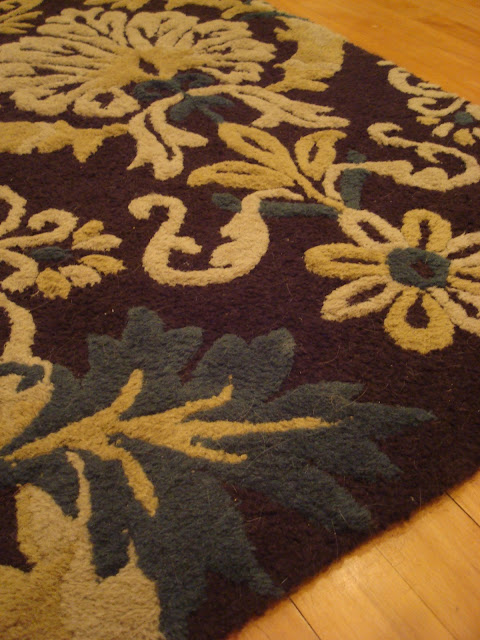 Warning- real life photo.... rug needs vacuumed!
The rug we bought for this room is a great
combination of cream, brown, yellow and blue.
The same color blue as our original prints!
To create some unique artwork for this room,
we decided to have the blue prints framed! 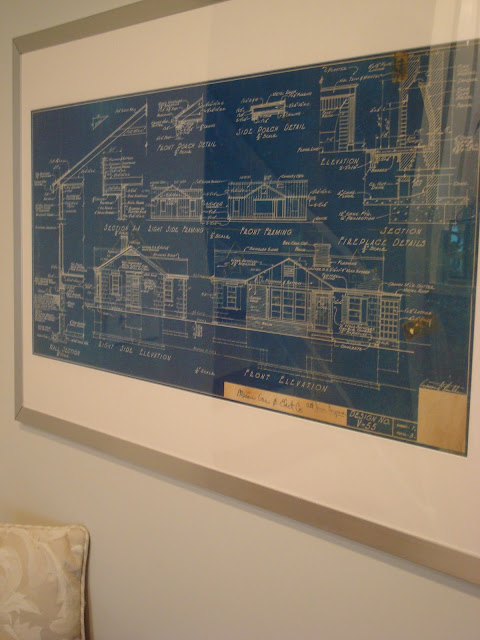 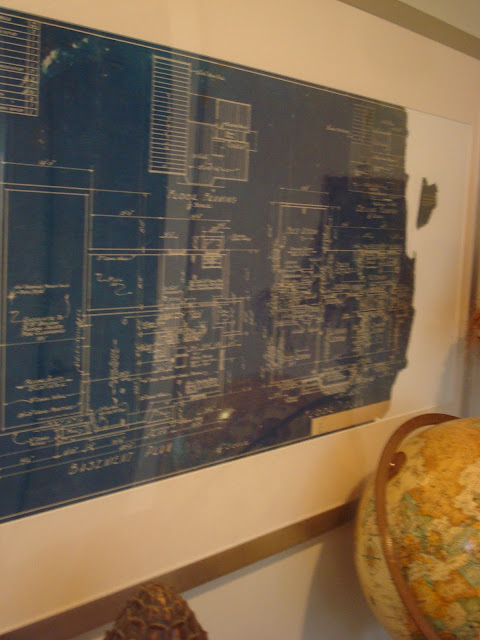 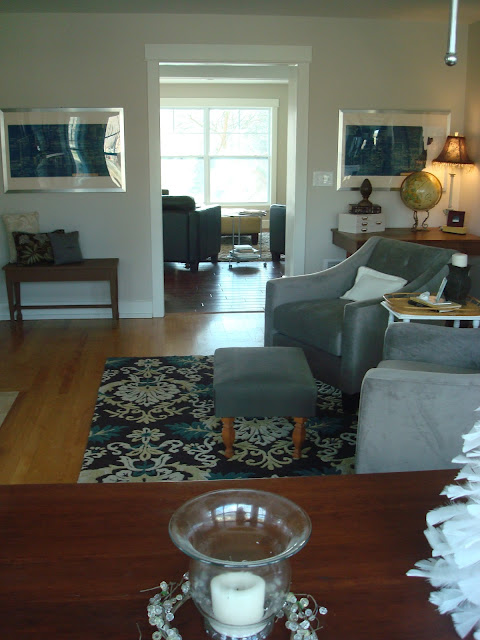 We hung them on either side
of the opening to the back room! 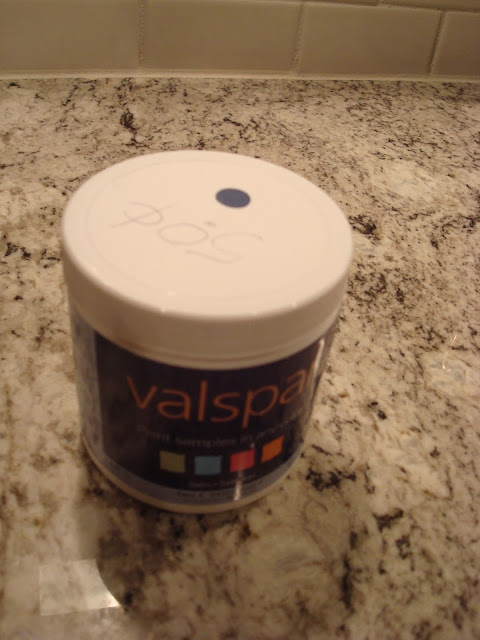 Yesterday while "window shopping" in Lowe's
I found this little paint sample on the OOPS shelf
and guess what...
it's Blue Print Blue! 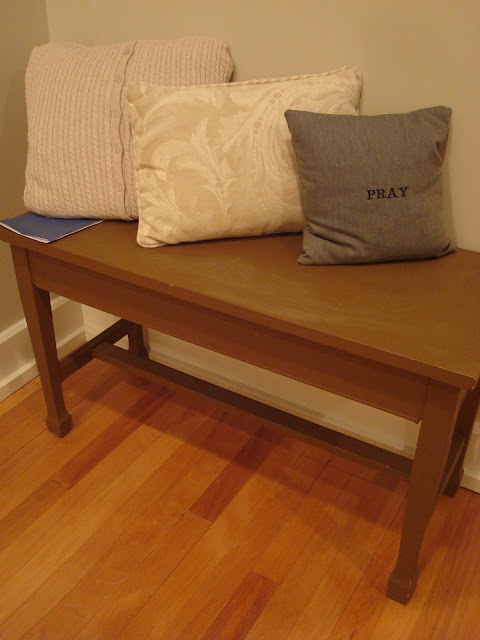 This bench has been a mulitude of colors...
and now I'm thinking of painting it blue!
Do you think I'm that brave?
Should I take that leap?
Am I the only one who
window shops at the
hardware store?
Stay tuned!
Linking to Inspiration Friday
over At The Picket Fence
and
Feathered Next Friday
at French Country Cottage
and
Free For All Friday
at Five Days 5 Ways.
Posted by dee dee at 8:37 PM

sooooo cool! I, too, am a frustrated, would-be architect. I regularly buy house plan magazines and redesign all the floorplans, add elements to the exterior - ahhh if only I had understood math...

Paint your bench my dear, if you hate it you can always repaint!

Thanks for visiting me today.
xox

Oh my gosh what an amazing find!!!! and they look beautiful framed and where you put them! You should definatley paint the bench blue...and I window shop at home depot too hahaha! Also,when you did the board and batten ( saw your comment at its overflowing!) What did you do about the existing baseboard?

Those are amazing! What a fantastic thing to add to your home and it is so lucky to have that letter from the previous owner. There is so much history in your home. I'm sure the previous owners would be amazed at all you've done to give it new life for your family! That bench will be perfect blue, do it!
I have to tell you I used to "design" houses in the yard when I was little too. I'd wait for my Dad to come home from work and take him on tours. My favorite was two trees opposite from one another, their branches formed french doors : )
An artist group sounds like a wonderful idea!!!

What a treasure!
Yes, you are blessed (in more ways then one).
You honored those original owners with your charm and talent. Framing both the picture and plans is such a beautiful display.

Yes, take the plunge... paint the bench. I love the color blue (I love any color blue but this is wonderful).

Be strong....be courageous! Paint the bench blue. I think it will be wonderful!

paint it blue. totally.
I love your house and those framed blueprints. LOVE

Dee Dee,
This is so awesome. I love that you found a piece of history and using them framed. They look beautiful!
Can't wait to see the bench painted.
Wendy

LOL! My sweet twin...we have our original floor plan, and I totally want to hang them!!! SO MUCH FUN...I need to get on it already!!!

What a nice gift from your neighbor. It's always fun to know a home's history. And...yeah, I think you are brave enough to paint it blue print blue. I think it would look pretty!

I'll have to show my husband the pictures of the original blue prints. This is what he does all day! He drafts home plans. But today they are no longer blue. What a treasure you found!

Paint it! It will look great! And yes I love to cruise the hardware store.

I missed this post till today. But this is SO strange and funny. Our house was also built in 1954. And I too also dreamed of becoming an architect! I was going to be a female rock star and I designed 2 glamorous houses for my music friends and I also designed a woods retreat for when we wanted to get away from our famous lives. LOL! I love (and am jealous) that you have the blueprints and the photo and letter. I SO wish I had that connection to the families who came before us in this house. I love how the blueprints look in the room with that rug. About painting the table blueprint blue--I say go for it. :)

At The Picket Fence said...

LOVE the framed blueprints and can't get over that you found that paint sample! You have to paint the bench now! :-) Thank you so much for sharing this with us at Inspiration Friday last weekend~
Vanessa