We have two BIG dogs.
They both came from a local rescue.
This is just a small bit about our two furry family members! 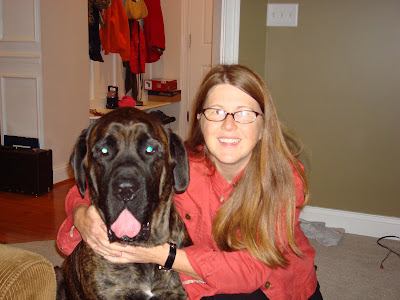 This is Abby! (she came with her name)
She is 150 pounds of pure English Mastiff .
Her foster Mom called her a train wreck and in many ways that fit her well.
When she was first brought into the rescue, she was sooooo dirty, that it took several baths to find out she was brindle, not brown. She was so flea infested that she had no hair on the back side of her body. It was then soon determined that she had heart worms and would have to go through a life threatening procedure to get rid of them, and to top it all off she ended up with some sort of lime disease. When she came to us we notice that she had a terrible limp, later diagnosed as severe arthritis. A few weeks after we adopted her she had to go in and have 7 teeth pulled. Poor thing.
And at the end of last summer, we took an emergency trip to the vet to have a fish hook removed from her mouth. (don't ask) Needless to say, she does not enjoy going to the vets, and will often try to climb into my lap during her visits. (yes all 150 lbs of her) To top it all off, she was not properly socialized and tends to have a fear of dogs!
Despite all of her "issues", she has been a pure joy to our home! 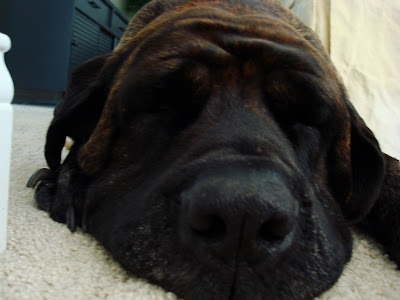 (notice her cute little broken "finger",
we call it her princess finger because it is always poised for tea)
This is Caribou. (we named him)
We are constantly asked "What kind of dog is he?"
Our best guess is part Catahola Leopard, Dane, Some other sort of cattle dog...
I've decided that he kind of looks like a rat terrier, only a very large rat terrier, so guess we could call him a Standard Rat Terrier! 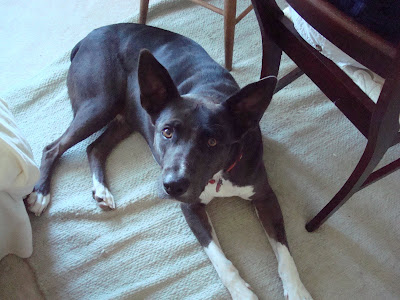 He weighs about 90 pounds.

He was found on some rural road in the middle of Indiana and was set to be "put asleep" the day before Christmas. Some saint at the shelter saw potential in this big boy and contacted the rescue here in Ohio. This wonderful individual even went so far as to take him home with her during the Christmas season, until out rescue could come and pick him up at the beginning of the year. We adopted him three weeks later. Poor Caribou came with some separation anxiety issues, he would cry whenever I left. Well he would even stand on the other side of the bathroom door and cry if he couldn't come in with me. I guess he figured if I was outside when he went, he needed to be inside when I went! I am happy to announce that he has adjusted very well and never turned into a dog that would destroy the home while we are away. (think Marley and Me)However he can be somewhat of an opportunistic pup and has been known to "eat" a bag containing plastic Christmas apples! We have remarked on so many occasions, how lucky we are to have such a smart, happy dog! 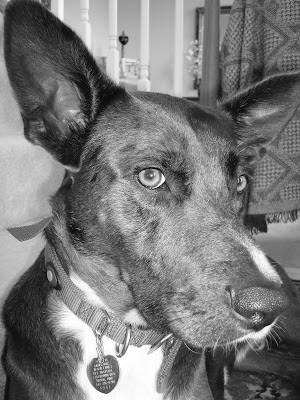 Our dogs have become part of our family and we wouldn't trade them for anything!
Posted by dee dee at 4:42 PM

Your dog stories are pure LOVE!

Kelly @ Much To Do With Nothing said...

I love these pooch stories. Thank you for caring. I often read the stories of each dog at our local rescue shelter. We adopted a dog from them. I know she was sent to me because she has a lot of anxiety problems, I think someone else would have thrown her out in the yard out of frustration, and never looked back. She's my baby and one of my 3 doggie loves of my life.
She's the little puppy on the link to my other blog. You can click her pic and take a look.

We also have a "free to good home" black lab, and a flea market mutt. They are spoiled children. lol.
Kelly

You have a huge heart! I love the pic of you and Abby...you're beautiful!
Thanks for supporting my aspire to inspire, I starting to second guess myself until I read your comment. I hope you can share some of your clippings and artwork...I'd love to see and hear them.
Just wondering, are you a buckeye? Have a good week.